Published on 2 April 2021 under Advanced

The word “light” brings up familiar images. The common image of “light” is that of something we see. Yet, the “light” that we can see is only a small slice of a much larger range of waves that are known as the “electromagnetic” spectrum. The entire “electromagnetic” spectrum is considered to be “light.” Yet, vast majority of the “electromagnetic spectrum of light” is invisible.This concept, and many more concepts pertaining to light, are explained in the 2017 book by astronomers Bob Berman, titled (1):Zapped: From Infrared to X-rays, the Curious History of Invisible LightBerman notes:

There is a “whole world of light outside our range of vision.”

Berman also explains that all light is in packets of energy (photons) that travel in waves. He states:

We can only see the wavelengths in the visible spectrum of light. All of the other wavelengths are invisible to the human eye. The different wavelengths of the electromagnetic spectrum have different characterizes (positive and negative applications and influences):

The wavelengths of X-rays have diagnostic significance. Their discovery in 1895 allowed health care providers to visualize bones, joints, and other structures. This application for x-rays was discovered by German physicists Wilhelm Conrad Rontgen. Rontgen was awarded the first Nobel Prize in Physics for his discovery in 1901. Rontgen did not understand that the high energy generated by x-rays would damage genetic material and cause genetic mutations. Rontgen died of radiation poisoning.

Polish scientist Marie Curie earned two Nobel Prizes. Her first was in Physics, awarded in 1903, for her pioneering work in radioactivity, a word she coined. Her second Nobel Prize was in Chemistry, awarded in 1911, for her discovery of the radioactive elements radium and polonium. Curie also did not understand the high energy generated by radioactivity wavelengths, including the energy produced by her elements radium and polonium, which also damaged genetic material and caused genetic mutations. Curie also died of radiation poisoning.

Walter Bradford Cannon was an American physician and physiologist. He was Chairman of Harvard Medical School’s Department of physiology for about forty years. His research expanded upon the concepts and importance of physiological homeostasis (a word he also coined) and the “fight-or-flight” response of the sympathetic nervous system. His investigations included exposing volunteer subjects to diagnostic x-rays to determine the digestion of food when exposed to periods of calm v. stress. Like Rontgen and Curie, Cannon did not understand that the high energy generated by x-rays would damage genetic material and cause genetic mutations. Cannon also died of radiation poisoning.

Computed Axial Tomography (CAT or CT scan) is technology that allows for rapid axial (“slice-of-bread”) x-rays of parts of the body. Because many slices of x-ray exposure are made, the subject is exposed to higher levels of x-ray radiation. This allows for a unique and often valuable imaging of the body, but at the cost of increased risks of genetic damage and mutations for the subject.

Magnetic Resonance Imaging (MRI or MR) also images the inner body, but without causing genetic damage. MRI exposure time is much longer and they are more expensive.

Some of the first applications for x-rays was to image the human spinal column. These early x-rays were known as spinographs. Today, chiropractors often make great use of all three modalities (x-rays, CAT, MRI), and many chiropractors have x-ray machines in their clinical offices.

The most common modality for imaging used by chiropractors is x-rays. As noted, many chiropractors have x-ray machines in their clinical offices. Chiropractors expose x-rays on patients for a number of reasons, including:

The internal disk structure can be viewed with both CAT and/or MRI scans.

The intervertebral disk can suffer from a number of acquired and/or pathological changes that may have clinical importance. These changes include degeneration, desiccation (drying out), fissures (cracks that breach the integrity), and herniation (movement of diskal material towards the nervous system: spinal cord, cauda equina, nerve root). 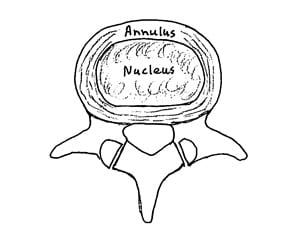 If any part of the annulus extends beyond the normal disc space, it is considered to be a bulging disk.

In the protrusion disk, the base of the displaced material is greater than the distance the disk material had moved towards the intervertebral foramen and/or the central neural canal. 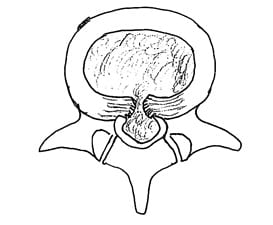 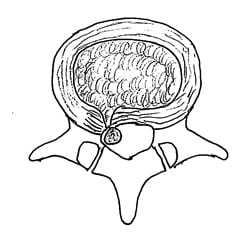 How Important Are Imaging Findings in the Genesis of Low Back Pain?

Spinal imaging finding are important for many reasons, including all of the reasons mentioned above. Ironically, one of the least important reasons for spinal imaging is to determine the source of a patient’s pain.

In 1990, researchers from the Department of Orthopaedic Surgery at George Washington University Medical Center produced a study where 67 subjects who had never had low-back pain, sciatica, or neurogenic claudication received MRIs (3).

About one-third of the subjects had a substantial abnormality on imaging:

In 1991, researchers from the Department of Neurology at the Medical College of Pennsylvania, performed magnetic resonance imaging of the lumbar spine on 66 asymptomatic subjects and found that 18% had either a disc protrusion or herniation (4).

An additional 39% had a bulge that was associated with degenerative disc disease. The authors also found examples of spinal stenosis, narrowed nerve root canals, osteophytes, and vertebral body involvement with multiple myeloma. The authors concluded:

“Degenerative disc disease is a common finding in asymptomatic adults that increases in frequency with age. It occurs more frequently in men and usually involves more than one level. The most common location is L5-S1.”

The authors concluded that there was a “high prevalence of abnormalities in the lumbar spine on MRI examination of people without back pain.”

In 2009, researchers from Hakodate Central General Hospital in Japan, performed MRIs on 200 healthy subjects to establish the baseline data of degenerative disc disease. The subjects included 68 men and 132 women whose mean age was 40 years (range 30-55 years). For the entire group, they found this incidence of disc degeneration, by spinal segmental level, was (6):

In 2010, researchers from Boston University School of Medicine assessed the role of radiographic abnormalities in the etiology of nonspecific low back pain because of the strong influence radiographic findings have on medical decision making. They specifically looked at the prevalence of lumbar spine degeneration as evaluated with computed tomography (CT) (7):

One hundred eighty seven subjects participated in the study: 104 men and 83 women, with a mean age of 53 years. Findings include:

In this study, the only imaging finding that showed statistical significance associated with low back pain was central canal spinal stenosis.

Degenerative features of the lumbar spine were extremely prevalent in this community-based sample, but they were essentially not associated with low back pain.

In 2015, researchers from Mayo Clinic, the University of Washington, Oregon Health and Science University, Henry Ford Hospital in Detroit, University of California San Francisco, Kaiser Permanente in Oakland, California, reviewed the literature to estimate the prevalence, by decade age (20, 30, 40, 50, 60, 70, 80 years), of common degenerative spine conditions (8). Their systematic literature review used either CT and/or MRI imaging of 3,110 asymptomatic individuals from 33 studies that met the study inclusion criteria. The authors specifically identified and quantified the following degenerative markers:

In 2015, researchers from Mayo Clinic, the University of Washington, Oregon Health and Science University, Henry Ford Hospital in Detroit, University of California San Francisco, Kaiser Permanente in Oakland, California, reviewed the literature to estimate the prevalence, by decade age (20, 30, 40, 50, 60, 70, 80 years), of common degenerative spine conditions (8). Their systematic literature review used either CT and/or MRI imaging of 3,110 asymptomatic individuals from 33 studies that met the study inclusion criteria. The authors specifically identified and quantified the following degenerative markers:

The authors began with this premise:

“Given the large number of adults who undergo advanced imaging to help determine the etiology of their back pain, it is important to know the prevalence of imaging findings of degenerative disease in asymptomatic populations.”

All study subjects were asymptomatic at the time of their imaging, and all had no history of back pain. Studies with patients with minor or low-grade back pain were excluded, as were patients with motor or sensory symptoms, tumors, or trauma.

“Findings such as disk degeneration, facet hypertrophy, and disk protrusion are often interpreted as causes of back pain, triggering both medical and surgical interventions, which are sometimes unsuccessful in alleviating the patient’s symptoms.”

“Prior studies have demonstrated that imaging findings of spinal degeneration associated with back pain are also present in a large proportion of asymptomatic individuals.”

“Imaging findings of spine degeneration are present in high proportions of asymptomatic individuals, increasing with age.”

“Many imaging-based degenerative features are likely part of normal aging and unassociated with pain.”

These findings are summarized tin the following chart:

This systematic review indicates that many imaging findings of degenerative spine disease have a high prevalence among asymptomatic individuals. Disk degeneration and signal loss were present in nearly 90% of individuals 60 years of age or older. The authors concluded:

“With a prevalence of degenerative findings of >90% in asymptomatic individuals 60 years of age or older, our study supports the hypothesis that degenerative changes observed on CT and MR imaging are often seen with normal aging.”

There are many reasons for spinal imaging, some of them are critical. Because there is poor correlation between imaged spinal degenerative changes and a patient’s back pain complaints, many chiropractors initially choose to forgo spinal imaging until response to clinical intervention is ascertained. Ultimately, the choice for spinal imaging or not is the call of the treating chiropractor who is looking out for the best interests of the patient.

“Authored by Dan Murphy, D.C.. Published by ChiroTrust® – This publication is not meant to offer treatment advice or protocols. Cited material is not necessarily the opinion of the author or publisher.”

Thousands of Doctors of Chiropractic across the United States and Canada have taken “The ChiroTrust Pledge”:“To the best of my ability, I agree to
provide my patients convenient, affordable,
and mainstream Chiropractic care.
I will not use unnecessary long-term
treatment plans and/or therapies.”